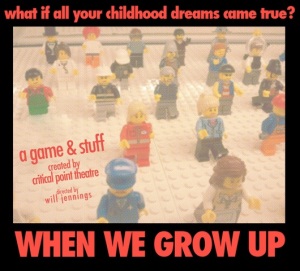 You may have seen the countless posts on all of our media fronts promoting our upcoming new play When We Grow Up and its premiere at this year’s Capital Fringe Festival. But you might be wondering what it’s all about. Well suit up and strap in. This is the first in a series of blog posts detailing every aspect of When We Grow Up. From production to execution, you’ll hear from the cast, crew, and creative collaborators. We’re firing off from all cylinders as we prepare When We Grow Up themed episodes of all of our podcasts. You might even see a few videos as well.

To kick things off, here’s a press release to give you an idea of what to expect:

A new play premiering this summer at Capital Fringe Festival, produced by Critical Point Theatre, asks the question: What if you could live out your childhood dreams? Should you? Would you? Could you, even? The show, When We Grow Up, is either a VR video game with really good graphics or it’s a crowdsourced performance with absurd elements. Either way, the audience is brought straight into the action. It’s a play in more than name.

The show asks audience members to brainstorm together for civic imagination, specifically about jobs and what they mean to people. Productivity, education, access. What makes a job a career and what values guide those choices? How are those choices validated or discouraged by society? The cast and crew could have held a seminar to talk about it, but decided playing make-believe was more fun.

Director Will Jennings notes: “This play comes from a place of angst. What if I chose the wrong thing? What if my action isn’t the action I should’ve taken? After being asked constantly about life choices, it seems the pressure is on to perform, even as a kid. The task of making an arbitrary choice is horrifying and daunting.”

The show will have six performances during the Capital Fringe Festival, located in NE DC’s Trinidad neighborhood, and tickets are available immediately at capfringe.org or by calling 866-811-4111.

There’s a lot of fancy mumbo jumbo in there to spruce it up and make it look nice for the press. At its core, When We Grow Up is not just a bunch of words on a piece of paper memorized by a group of actors and performed nightly. We love those, don’t get us wrong. This is something more. When We Grow Up is an experience. Imagine your favorite coffee drink. We’ve combined a flavorful base storyline with a custom blend of improvisation. Add a whipped topping of audience interaction to create a perfect combination of observation and participation. And that’s just the show in a hazelnut-shell.

All throughout childhood, everyone poses the question “What do you want to be when you grow up?” Some people choose careers based on the things they love. Some decide based on what will allow them to support a family. Others still choose because of pressure from their parents. Regardless of the choice, we can all agree that the occupation of a person is a hugely important part of who they are. We not only want to explore the “why” of personal choices, but also what impact those careers have on society. Is one job more valuable than the next? Is a doctor worth more to humanity than a comedian? Some would argue that laughter is the best medicine.

But as of this post, there is no documented case of laughter curing cancer.

So join us. The show dates are as follows:

Ticket information is available at the Captial Fringe Website.

If you can’t make the show, consider donating to and sharing our IndieGoGo campaign here!