Prepare for our Series Finale on February 14th, by going back to the beginning and reliving some of the most important moments from The Grayscale

In this recap of the second season, we recap the preseason Twitter Fiction (2:00), then we hear the contents of the missing case file tape; Participation is Mandatory (6:20), and finally we receive a Christmas treat on the pirate radio stream, a prequel of sorts from the birth of the Collective, At The End Of A Circle  (32:00)

This presentation contains the following previously released episodes in their entirety:

Starring
Coryn Carson as Agent Morris
Alison Wien as Corrie Hannigan
with Will Quinn as Mr. S
and Nate Betancourt as The Voice Inside Your Head

At the End of a Circle 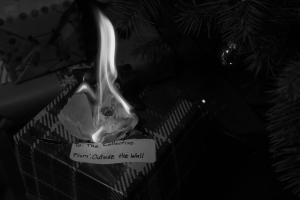