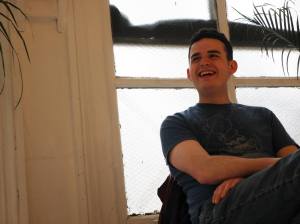 Words of wisdom from my former roommate Matt; his logic was always simple, true, and crude enough to keep your attention.

He shared this observation with me during what was the tenth time I explained the changes I needed to make to a then two-year-old, untouched, first draft of a screenplay I wrote. I often spoke of my desire to write, that working as an electrician left me feeling creatively unfulfilled. To be clear, Matt was and still is, very supportive of my artistic intentions. It was my follow through, or lack thereof, that he liked to give me shit for.

So I started reading a few books on writing. Well, I read the first couple of chapters of a couple books over a couple weeks, and then a couple things came up. I was just too busy to be a writer. I settled for romanticizing the idea of being one and blaming all kinds of things for my inability to give myself to the craft.

Later that year, six of my friends moved to New York with their newly formed theatre group, Critical Point Theatre. I reached out to the group who welcomed me with open arms and a question: what did I want to do? I said I wanted to write; I wanted to help with a new podcast they were starting. It was a sci-fi anthology series in the vein of The Twilight Zone, a radio drama called The Grayscale.

Never heard of The Grayscale? Feel free to catch up here: https://itunes.apple.com/us/podcast/critical-point-theatre/id975980395?mt=2

I asked to write an episode, and without any discussion, I was given a slot and told to write a script. That was it. No guidance, and no opportunity to back out or get too busy. It was simply decided. I was terrified.

What had I done? How was I going to write a full script? I had no idea! I had only written one once, and I was about to hit year three of my first round of revisions. Did I even want to do this? Or did I just want people to think I could? The problem was never my schedule. The problem was that honestly, I wanted to be known as a multitalented individual, but I didn’t want multiple commitments.

I recalled a story my mother told me about an author she loved, SE Hinton. Hinton became famous at a very young age when she published the classic The Outsiders, a novel that she was, understandably, struggling to follow up. She was now in school studying to be a teacher, and finding it difficult to write at all. But SE Hinton is a true writer. So what did she do? She wrote through it. Two pages a day, no matter how long it took, no matter how much she hated it, she wrote two pages every, single day. She claims that this method is the only way she was able to complete her sophomore (and my personal favorite) novel That was Then, This is Now.

The realization I had is one all artists have: art doesn’t just happen; we have to make it happen. This is the job we always wanted, but it is still a job; which means schedules, deadlines, as well as making and following through on commitments. So I got myself just that, a schedule full of deadlines to meet. A few weeks later, I turned in my final draft of the first script I had written in three years. The first one I had ever actually been proud of, The Grayscale Episode 4: The Last Word on Tragedy.

I was so proud of myself, and I rode that high for days. I thought the difficult part was over! What I soon realized was that meeting other people’s deadlines (a task I have far from mastered) is only half the battle, you need to be able to create your own. Committing to a project is one thing, but committing to a craft, to any form of art, is a lifestyle change. I don’t think I will ever figure out what makes people true or great artists, but I am certain when I say, what stops artists from achieving is laziness.

I am still trying to find what method works best for me. I wish I could say that I have written every day since this realization but I haven’t. I consider this my period of adjustment. But I have stopped making excuses for not writing. Now if I go a day without writing I force myself to admit I slacked off, and look forward to the opportunity to write the next day. I try to volunteer as much as possible with the ensemble whenever they need someone to write because I know that those projects will help me push through this adjustment.

So why did I write this blog? Not because I had to, not because the ensemble asked me to, but because I want to. Goals are and should be very personal; I am the only person responsible for making sure that I am enjoying the life I live. So if there is something I want, a skill to try my hand at or a topic I want to be able to speak about then I will quit thinking about how to master in no time and start just doing it. Skills, artistic or any other kind, require a commitment, discipline, and an honest personal desire to complete them.