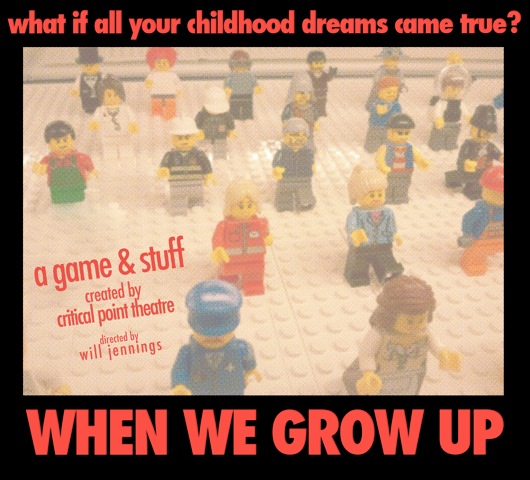 Many actors say they put themselves into the character that they are creating. Now this may seem kind of like a pompous thing that actors say, but it is pretty solid advice. Putting oneself into a character seems like a simple thing to do, but this grows slightly more complex when you consider the implications that different styles of theatre and film can bring.

In When We Grow Up, I play Terrance Hinton, a Physics PHD student that has found a way to see parallel worlds. Now, I’ll be the first to admit that I, Trevor, am nowhere near smart enough to discover parallel dimensions, let alone get a PHD; however, because I am helping to devise When We Grow Up, the differences between me and Terrance could end there. BUT, there is one more important element to When We Grow Up: it is a pretty absurd piece of theatre.

Now, with all that in mind, I can begin developing the character of Terrance. I want to stay true to the piece and true to myself. So, what this means to me, is that when creating Terrance, he needs to be slightly exaggerated, but no so much so that he becomes unidentifiable. For an exaggerated characters, I begin to think of traits that I have that can be stretched out, and traits that a 20 something physics student might have and stretch them out.

For instance, I have a passing interest in swing music. I apply this to Terrance by making him a huge fan of swing music and making him be versed in the various artists of the genre. Now, a physics PHD student is (hopefully) a pretty smart person who is interested in science, I stretch this out by having Terrance’s ultimate life goal be to make a huge scientific discovery and contribute to the betterment of mankind.

I pretty much follow this process until I end up with someone who is exaggerated in all aspects of their life, but with whom I am still able to identify with. And it’s important for When We Grow Up that both are true.

The best part is that no one will ever really see 90% of the work you do when devising a character. There really isn’t a way you can convey all of your character’s background and not just have just a jumbled mess of a show. But, as an actor, it helps to know your character’s ins and outs, no matter how ridiculous it might be.

So there’s a little taste of an actors work, and know you know! (I know, I feel pretentious when I phrase it that way too.)

Check out our IndieGoGo campaign for more information and updates on When We Grow Up!

One thought on “Creating A Larger Than Life Character – Trevor Scott, When We Grow Up”