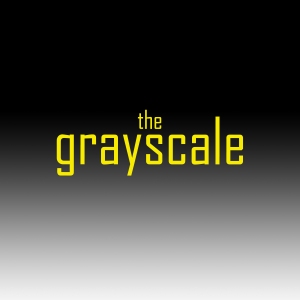 This is the first in a five part blog series about the new CPT broadcast stories. All of our podcasts will premiere on Valentine’s Day, 2015. Here talking about “The Grayscale” is ensemble members Matthew and Andrew:

Andrew here. I have some information that I debated keeping to myself. After some conversation with Matt Schott, we’ve decided to just tell you the whole story.

A few weeks back Matt and I were discussing an idea for a radio drama podcast of spooky tales called “Washington Frights” that we ended up abandoning. In the middle of this discussion, we heard the familiar ring of our building’s buzzer. When we pushed the call button, we heard no response. Suddenly, there was a hurried knock at our door. Matt opened it, but no one was there. Instead, at Matt’s feet laid a coffee-stained envelope containing a handwritten letter and a cassette tape labeled “Grayscale Cases.”

We have deciphered the cursive chicken scratch of the letter to the best of our abilities, and the contents are as follows:

To Whom It May Concern:
You do not know me, but I need your help. If I waited any longer to reach out to someone about my concerns, well…I don’t know what might happen to me next. It’s all very hazy.

A few months ago I answered a peculiar classified offering a hefty salary to someone with a superb moral compass to “adjudicate important matters of behavior.”

I couldn’t resist, so I sent my information. I was mailed a survey of hypothetical’s to test my morality. I must’ve passed, because the next week another letter showed up at my doorstep, containing an address, a name, a time, a tape recorder, and an unusual looking scale.

Confused, I showed up at the correct date and time and hoped for the best. I can’t get into full detail here, but suffice it to say, this job is not worth the pay.

I have been given a cruel responsibility. The cases I adjudicate feel rigged. The equipment…this scale…makes more decisions than I do. And I don’t think it’s as forgiving as I am.

I’ve said too much already. I feel my time may be numbered, so I’m sending you copies of my tapes. There are people who don’t want these to get out, but I need you to spread the word, because very soon, I may not be able to do the job myself.

Spread the word, before it’s too late for us all.

Godspeed,
-The Voice Inside Your Head

While this note was a bit unsettling, the enclosed tapes contained exciting new stories. We can’t confirm nor deny the validity of anything that we have heard. It’s probably just a prank, right?

Well, we hope it’s a prank, because as long as we continue to receive these tapes in the mail, we are going to be releasing them to you in podcast form.

We’re calling this show “The Grayscale”.

Listen at your own risk.

The Grayscale Won The Following Production Awards at the 2015 Audio Verse Awards:

The Grayscale Was Nominated For The 2015 Audio Verse Awards In The Following Production Categories: