Happy Summer everyone! I guess that depends on what you’re doing this

Summer; I’m stuck taking accounting (for the third time) among other classes, so it’s kind of a dismal Summer. But I’m done in two days so the light at the end of the tunnel is near. That being said, I’ve been away from theatre for a while now so it’s difficult to talk about productions I’ve been involved with and working on, however REFRESH premieres tonight so get excited for that!

What I WILL talk about then is a play I saw about a month ago when I visited home and escaped the shackles of accounting for a couple of days. The play was Bat Boy: The Musical, and I saw it at First Stage Theater in Mclean Virginia. But rather than talking about what the play was about, (it’s about a bat boy and there is some singing involved,) I’ll talk about what the experience of seeing the play was like for me.

So I went to the play alone. Yeah, alone. And I’m okay with that! My parents were going out to visit friends that night 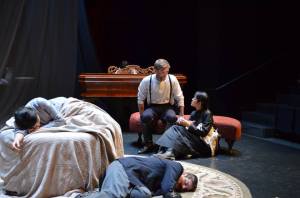 but they kept saying “oh go with a friend! Bring a friend!” But I couldn’t really think of too many friends in town that would get as excited as I was to watch a musical about a singing bat boy and I really didn’t mind going alone anyway. So, I put on my fancy pants, my favorite red shirt, I brushed my teeth three times, (I have an obsession with dental hygiene,) and hopped in my Toyota named Shelly, (named after someone I met on Omegle video chat in 2009) and went to First Stage Theater.

First Stage is very small, maybe 60-70 seats. I sat in an isle seat in the fourth row. Suddenly a woman comes up to me and asks me if the seat next to me was being used; I said no, and she sits down. “Oh, so you’re alone?” she asks. She had this cool accent, I think it was Australian. “Um, yeah,” I say. “I was going to come with my friends but they had to bail last minute.” Liar. Rather than just sit in silence next to this Australian woman I go, “So are you…a theatre goer? Like do you…do you like to go to plays a lot?” I’ve got mad game if you couldn’t tell. Not that I was spitting it at that moment, she was probably in her thirties and I’m in a relationship with a lovely lady. Hi Briley!

“Oh no,” she says. “I’m a bat ecologist.” What the hell? “Wait, so, like, you study bats?” I ask. “Mmhmm,” she says, like a female Hugh Jackman. “The director asked me to come see the show, and then on the final night of the performance I’m going to have a talkback with the audience about bats. But I read the description of the play and I feel like it’s not about bats at all.” (It wasn’t. It was a great play but to be honest it had nothing really to do with the scientific nature of bats. But I wasn’t going to tell her that because I’m nice and she is Australian.) “Oh cool!” I tell her.

“What about you?” she says. “Do you see a lot of plays?” “Yeah! I study theatre at college so definitely. Our school actually did this play a while back, I’ve heard it’s pretty cool.” We ended up talking about how she came to America, (husband’s job,) the life of a college student studying theatre, and then the play
began. It was so good! But like I said, had nothing to do with bats really. Sure, the dude is like a bat, but…like I just couldn’t understand why the director asked her to give the talkback. But I digress.

Then, intermission! Which she called ‘interval.’ “Oh, is it interval?” she asked me, her dialect making me think of kangaroos and koalas, and Hugh Jackman. I love Hugh Jackman. “Yes!” I said.

During intermission some of the actors were interacting with the audience members in character. Of course, since I 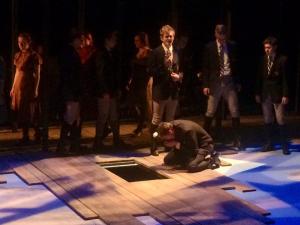 was in the isle, I was going to get a taste of it. One of the actresses, a young woman who played kind of a hick townsperson, came up to me and lady Hugh Jackman and said, “are ya’ll together?” We said no. “You look like
you’re together. Anyway, I’m going to give you a piece of advice about men that my father taught me. ‘You can’t earn your man, until you LEARN your man. And don’t get herpes.’” Okay!

A couple other cast members were talking about cows, because there’s this subplot about cows, that’s all I’ll say, and they’re asking audience members if they know anything about cows, which they didn’t. My Melbourne friend whispers to me, “My parents are bovine scientists. We grew up on a farm and I had a lot of cows, but I’m not going to
tell the actors that because then they’ll definitely come over here.” This girl was like, the prime audience member. She knew a lot about bats and cows. But not a lot about theatre, but hey that’s cool too.

So why do I tell you this story? I tell it because it shows that theatre can bring people with completely different interests and backgrounds together. Of course, her and I had different reasons for seeing the show, but meeting her became a memorable part of that night. I’m not really sure how her talkback went, but lady Jackman from Melbourne Australia, if you’re reading this, I hope it went well!