I’ve never really written a play before, yet here I am, doing just that. I don’t really consider myself a writer; for the most part, I am an actor. Sure, I can write an essay to pass a class or make a witty Facebook comment, but that 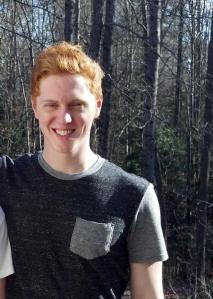 doesn’t really put me in the same caliber as Stephen King or Thoreau. Yes, I’m quite green in the field of playwriting, and if there’s one thing that I’ve learned so far it’s that writing a play (or any meaningful work of fiction) is an extremely daunting task. Writing requires such intelligence, wit, and soul that I’m already starting to feel a little outclassed by just writing this sentence. Luckily for me, I have a little help.

When We Grow Up (The title of the piece) is a collaborative effort between me and two other ensemble members: Will Jennings and Ryan Barker. While, no doubt, writing a piece solo has some benefits, writing a play with two other individuals has been fruitful. Together, we are able to craft our own ideas and see those ideas grow within the group. For instance, during the very beginning stages of the process, we would all meet and share what we wrote on our own time; which was mostly character bios and other background materials. Once we focused the good ideas a bit more, we were able to synthesize all of our individual ingredients into a cohesive story. Once we had started on the first draft, it was something remarkable. When we read the first scene for the first time, I probably had a big stupid grin on my face. Seeing these characters we had all written individually interact together for the first time was fantastic. I was hooked to this whole playwriting thing.

I’m trying to put myself into the writing as much as I can. At times, it is easier to do this than others. I am opening myself up to creative inspiration from numerous and various sources; everything from the music I listen to, to the

games I play, to the people I know. Part of writing is opening yourself up to the world around you and allowing it all to sink in. Creating this kind of work is difficult, it’s easy to get caught up in the semantics, to get lost and not know where to go next, or to become frustrated and lose focus. For me, what makes it art is triumphing over those challenges and enjoy yourself while doing it. And making that triumph becomes much easier with allies along for the ride. Also, remembering that you can always go back and edit something later never hurt any writer. So, as those Musketeer guys said, “All for one, and one for all!”