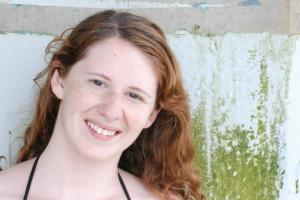 A lot of choices that I’ve made have been easy. Faced with getting to a meeting late or running the risk of a parking ticket, I often park illegally. Faced with racing to a deadline or leisurely spreading out my work, I pick the all-nighter. Faced with a frustrating last year of college, I graduated early. But there is one that sticks in my throat. Faced with giving up my middle class security for a pipe dream, I waffle. A lot.

Thinking I would just wander and work where I could after graduation, I ended up accepting a full-time position in my college town in Southwest Virginia. This is a “career-track” position. I could work comfortably during the day, strive for promotion, and return to Netflix, my boyfriend, and my cats at night. I’m not trying to be sarcastic; this is actually a great opportunity. And at the same time, I’ve seen friends who are gunning after their passions as artists and are blossoming. Landing small victories that keep them going until they reel in a bigger fish. While I’m sure they encounter many struggles, I feel the green-eyed monster of envy perusing Facebook. Carefree! Young! In the city! The dreams Tumblr posts are made of… In the meantime, I often feel like I’m living out the opposite of an HBO Girls-esque fantasy. Too settled, too resigned, and too serious.

I know. I know how immensely privileged I am to be able to afford a generous lifestyle. But I wonder if fretting over how many self-employment deductions I can put on my tax returns is really healthy at a ripe old 21 years of age. Shouldn’t I be seeing more bar fights? I think A List of Irrational Fears for Future Leaders of the World struck me for its portrayal of social paralysis. Like me, these characters struggle with pushing beyond their comfort zones. I’m sure that Kenrick doesn’t want to waste away in his apartment because he cannot genuinely face a person. But waste he does, since he cannot bring himself to make a big enough change. I’m sure Jorja wants to move past her “daddy issues” and have a non-dependent relationship. But she clings to her patterns because showing vulnerability sucks.

It’s easy to lose your desires wrapped in a security blanket.

A professor I met talked about dedicating oneself to the rarely rewarding arts world, calling it “taking the leap.” She cautioned that one has to commit themselves wholly to their passion in order to get any tangible success. That if one does not give up comfort to pursue a goal, they will never be motivated to follow through. This is what I’ve been dreading and it’s difficult to explain to others. “You have a great job. Why not pursue this theatre thing on the side?” “Isn’t what you’re doing a lot better than waiting tables?”

It’s difficult to express that artists don’t just work dead-end jobs because they have no skills to have any other employment; 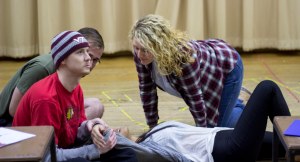 they do it so that they stay hungry. It sounds crazy, but I understand why you want to stay in a crappy job, so you’re provoked to do what you love. But the mundane sets in/We play by the rules and plow through the days/The years take us miles away/From the time we wondered when… That’s from “A Way Back to Then” from the meta-musical [title of show]. The character flashes back to her childhood and wonders how she strayed so far from her goals. What I enjoy about this song is how even after detailing her struggle, the character finds herself in a more realistic, adult joy. She takes the leap: You’re that little girl/With her wings unfurled/Flying again

In 2014, I’m taking all of my savings and dumping it into touring performances, big city apartments, play readings, and probably way too many whiskey sours. I don’t think that by moving, I’ll turn into a fountain of endless youth. But I do want to pull the rug out from under my feet, at least once. I’ll leap (a little). Maybe I’ll land.