When I first mentioned my idea for what would become A List of Irrational Fears for the Future Leaders of the World to a very close friend, she responded with, “That is the worst idea I’ve ever heard.” Two years later, and we’re preparing to take the play on the road. Now, that’s not a statement I’m making out of spite to my friend. In fact, she was right about my initial idea. It was terrible. What I’m saying, and what I hope to illustrate in the following ramblings, is that writing a play is a frustrating journey where the option to just give up looks golden many times along

When you work on something for an extended period of time, you can turn terrible ideas into fully actualized ones…

…which could still turn out terrible… I’m not calling my show terrible, I’m- Forget it. Let’s move on.

The first draft of Fears existed as an experiment in form and as a requirement for my final college class senior year, which are two awful reasons to try to create something.

I had an idea that you could display more effectively the way in which theatrically tragic characters lose control of their lives by having the time lapse between every scene increase in a uniform manner, with the goal being that the audience would feel this character literally losing his grip on the situation as time quickly runs out. I tried to prove this by writing a play where scene two was 10 minutes after scene one, then scene three was 10 hours later, then scene four was 10 days later, and so on until the final scene of the play would be 100 years later. I took this crazy idea and put it into practice for my advanced playwright class final. The thing about that class though, is that I was only required to write between 10-20 pages of a potential play. Yup, that was the final project of an advanced course. I turned in the first “draft” of Fears to rave reviews from the usually bored members of my class. This version of the play was four scenes and 20 pages of whiny college aged characters hiding big secrets from each other in a very 1950s murder mystery play kind of way. It lived in a strange space between hyperrealism and extreme camp. Worst of all, I wasn’t even able to test my time-lapse theory because I only had to write the set up for the show.

In the midst of all of this dreaming about the power of 10, I picked up a copy of Fears of Your Life by Michael Bernard Loggins, which is essentially a published list of one man’s fears. This hit me as a great theatrical convention, and thus the list of one’s fears became the starting point for all of my characters and the most readily interesting facet of my show. Very quickly the time-lapse elements were dimmed in favor of more scenes about fear. This was great as a point of intrigue, but the show was still this big goofy mystery about nothing.

We did a reading of my first full draft of the show, and I do mean full (clocking in at a robust two hours and 30 minutes), and I learned just how disjointed it all was. There were a million themes going on, crazy conventions that were half explored, and even optional prologues and epilogues. This is the painful crossroad that playwrights should come to when first hearing their work done aloud. I can’t stress enough how important it is to hear your work fail. This is when you will find out what your show is truly about. I went into Fears trying to write a show about sneaky liars and gamesmanship. There were giant conversations about game theory and wild twists and turns, and it ALL SUCKED. We even wanted the show to be called “Checkers” at one point. I know, I’m a genius. This theme was flat because I didn’t really care about it. Other parts of the show, with themes that I didn’t intend to explore, were what rose to the forefront of the reader’s minds. In the post read discussion two of the people at the table got in a lengthy debate about whether the play earned the word “leader,” in the title. This debate was really about the bigger issue of what it is that I’m saying about our generation and our world if I call a bunch of helpless characters our “leaders.” It took other people debating one word of my already too long title for me to really understand for the first time why I was writing this play. 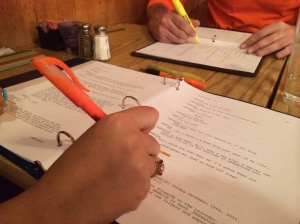 It felt great. And awful. You write a two-act epic that takes you a year to develop and you confirm with your artistic self that at least half of it is crap and needs to go into the trash pile, immediately. You have to kill your darlings. It’s true. By this point in reality, we have a tight 55 page script. Gone are the prologues and epilogues, the motifs of games, and the spectacular staging moments that we would’ve never had the budget for anyway. There are still bits of the time lapse theory, though the play doesn’t need them to stand any more. What are left are fears and the very real influences of my life and the lives of the people around me. This isn’t an article about the point of my show (which I will most likely explore later in another blog), but rather how to get there. You can try to write something totally void of yourself and out of your wheelhouse, but you will never succeed in doing that completely. You’ll bring it into a room of people and the stuff they will connect with in your script is all the stuff that’s really you. Every time. I promise.

I recently listened back to the audio recording of the first read-through of the full play. There is an exchange I’d like to share between myself and my friend Kelsey about the awful climax I had written for that draft:

Andrew: The…the…the climax…I can find a better way to do that, and I will.

Kelsey: Well that was, like, your intent to write the show in the first place.

Andrew: Yeah. I’ve been putting off that scene for a year and a half…

Kelsey: He was like ‘Yeah, I’m going to write this great show about a guy who says he’s afraid of everything, but the big reveal is that he’s not,’ and you haven’t actually written that, have you?

No. I still haven’t written that show. But who cares? The idea for that show was terrible anyway.